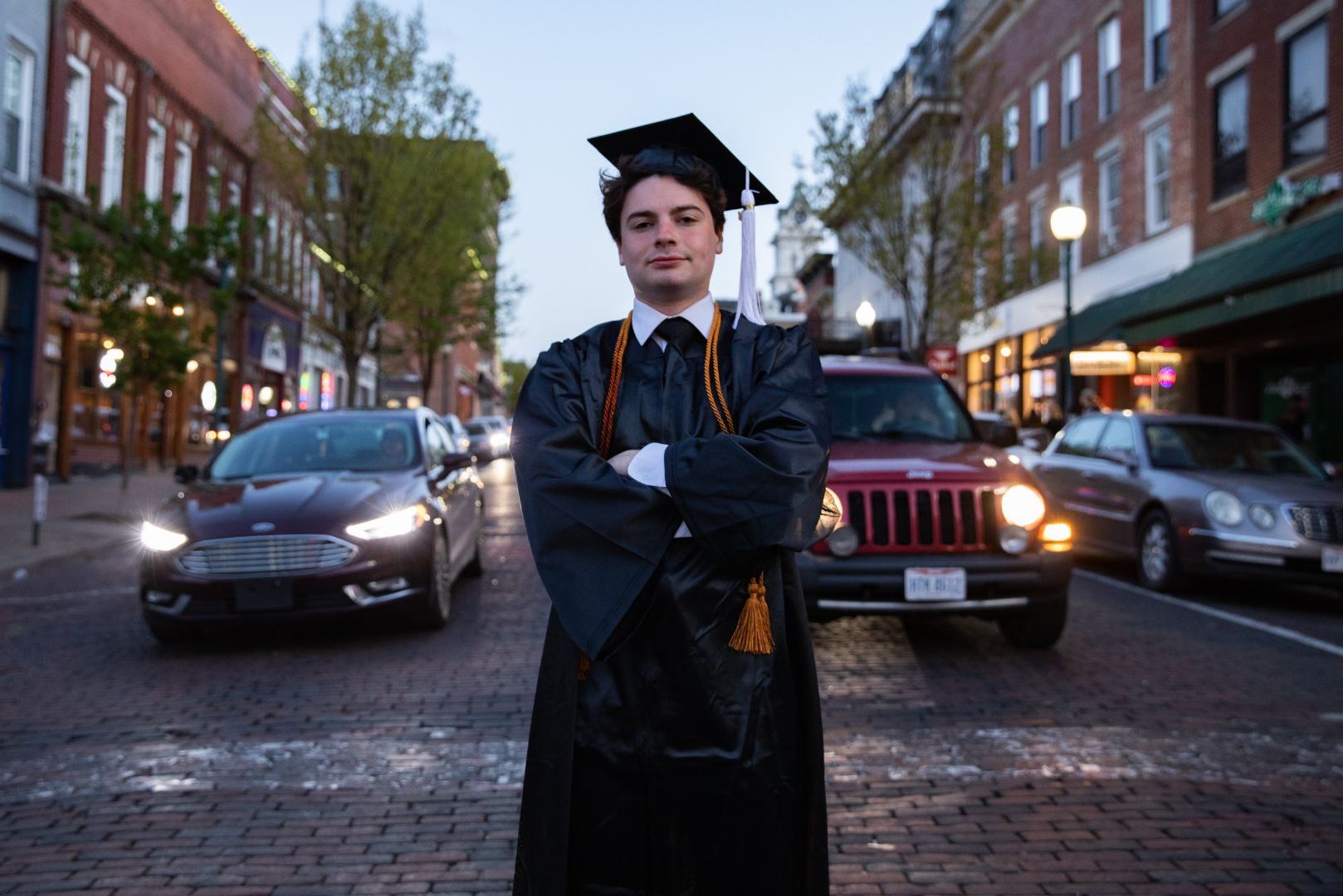 From working in the heart of Washington D.C. as an intern in Congress, to reporting business stories in the city of Denver – the wealth of experiences Matt Geiger gained through OHIO has granted him invaluable skills, knowledge and personal growth.

Geiger, who graduated with degrees in economics and political science from the College of Arts and Sciences last spring, opted to remain at the university he loves to pursue a graduate degree in economics.

Though he is from Maryland, he is no stranger to Bobcat pride: Geiger’s parents met on the bricks of Athens.

“I had grown up as a Bobcat,” Geiger said. “I never really felt like I had to move – it really just feels like moving from one home to another home.”

For much of his undergraduate career at OHIO, Geiger worked as the digital managing editor of The Post, a student-run news publication. However, his passion for reporting started at a young age.

“When I was in high school, I had my own news website that I ran. That was my first experience with journalism, running my own little operation,” he recalled. Joining The Post during his freshman year only strengthened Geiger’s interest in journalism.

“The experience of just being in a newsroom and constantly talking with other people that are involved with news, that gave me a good enough exposure to feel comfortable being in another newsroom and starting my journey,” Geiger said.

The skills Geiger acquired through his studies and extracurricular experiences at OHIO helped him land three summer internships, each different from the next.

The first involved interning for a U.S. Representative on Capitol Hill. After that, Geiger worked as a business reporter for the American City Business Journal.

“Most of these internships are kind of just me thinking on my feet,” he said. “It’s been intimidating, but it’s been really fun and exciting, and a journey that’s full of growth.”

His final internship was made possible through the Dow Jones News Fund, an internship program that places students in newsrooms across the country. Geiger had the opportunity to live and work in Denver, as a business reporter for BusinessDen.

“I’ve travelled a lot and I’ve been fortunate enough to do a lot of really interesting internships thus far, which has been beneficial for my studies and life as a whole,” Geiger said. “I have a bunch of interests, and I like to try new things, so this was the best opportunity for me to do that.”

One of the most memorable stories that Geiger worked on explored the topic of supply chain shortages before it became a national issue. The story investigated problems at the Port of Los Angeles, one of the largest ports in the country.

“It was a fascinating story. I’m still pleased with how it turned out and illustrated the impending supply chain shortages that would happen in the fall,” he said.

Geiger’s journey hasn’t been linear, which is what forms his approach toward his future. With a combined love for his college town and passion for learning – deciding to pursue a master’s degree at OHIO was an easy choice for Geiger, who graduated early and completed his bachelor’s degrees in only three years.

“I’d like to keep learning about a subject that I’m interested in,” Geiger said. “The opportunity to do that while I’m still in Athens – that’s the best of both worlds.”

Geiger’s love for the community-oriented town of Athens is shared by many, as the city becomes a home for many students and alumni, even after graduation.

“Everything is so walkable; everything is so student-friendly,” Geiger said. “The campus atmosphere is unbeatable. You cannot get Athens anywhere else.”

When Geiger graduated last spring, he put the word ‘maybe’ on his cap, to signify his outlook on taking risks and seeing where they take you.  He keeps this mindset as he looks ahead to the future and where his career will take him.

Geiger’s journey has been incredibly rewarding, but he attributes his success to the hard work and perseverance that has paid off through his opportunities.

“Whatever challenges that you face in your time here can easily be overcome with the mindset that there will always be a light at the end of the tunnel,” Geiger said. “The key is that I’ve been persistent and that I’ve believed that things will become better in the long run. As long as you keep that mindset, then usually things will work in your favor.”