Designer Holly Joe establishes an interior evocative of peace and serenity for a spectacularly sited spot on a pond.

Sign up for our weekly home and property newsletter, featuring homes for sale, neighborhood happenings, and more. 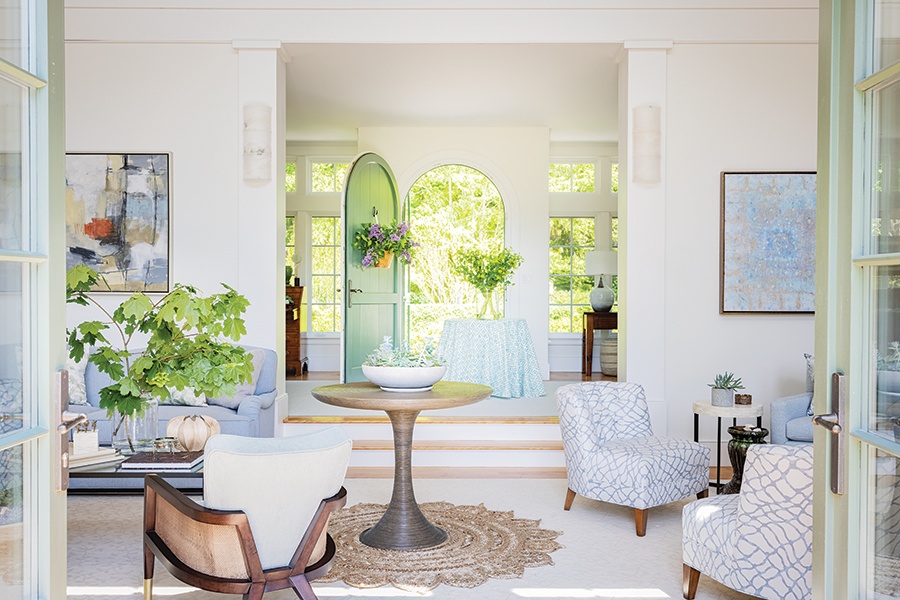 Interior designer Holly Joe steadily kept the home’s open nature in mind as she crafted the design. “Because you can [always] sort of see into the next room, we needed to make sure that they all talked to each other,” she explains. / Photo by Michael J. Lee

In case you need a refresher: Early spring 2020 in Massachusetts was not normal. It was the 19th coldest April Boston had seen since 1872. Offices were closed, events were canceled, and people were learning to sew fabric facemasks for the first time. In Dover, however, a couple was envisioning a home that would be an escape from the relentless cold and closures.

After renting for a few years, they were ready for a spacious, private property to call their own. When they stepped through the front door of a 6,500-square-foot residence at the end of a winding driveway and saw straight through the entryway to the sparkling pond beyond, they fell in love. “The connection between the indoor and outdoor space, the views of the pond from almost every room of the house—it was a dream,” recalls the wife. Built in 2005, the home was intentionally designed in a U-shape to fully embrace the pond it’s situated by.

Though the setting was perfect, the homeowners had a specific inspiration for the interior design: Tulum, Mexico. They had traveled there together several times and wanted a scheme that would mimic the serenity they felt there. “I loved the idea of creating a space that was inviting and made you feel relaxed and warm, where the elements worked cohesively together,” says the wife, who is originally from Mexico. 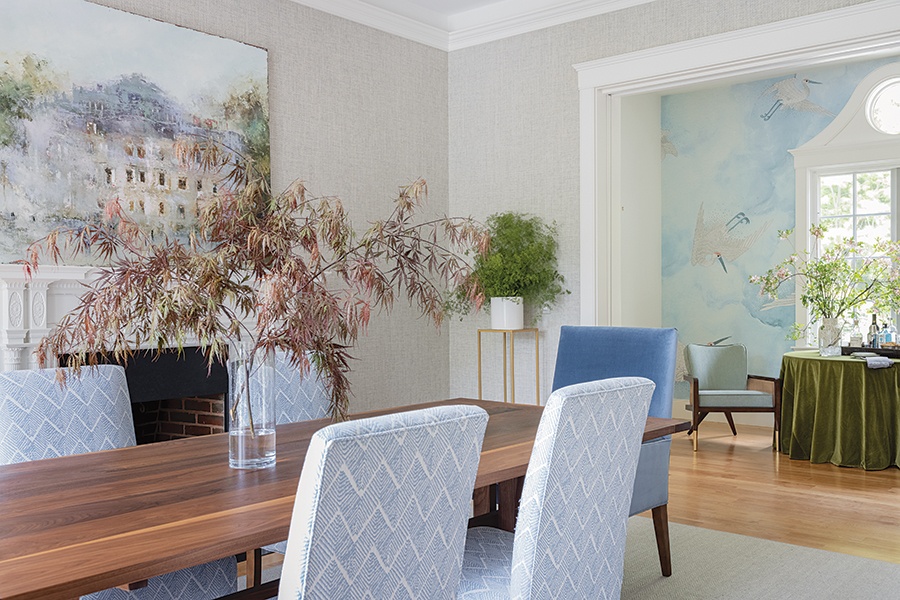 The centerpiece of the dining room is a broad wooden table made by Boston-based crafter, Saltwoods, the team who also hewed the surface in the informal dining area. / Photo by Michael J. Lee 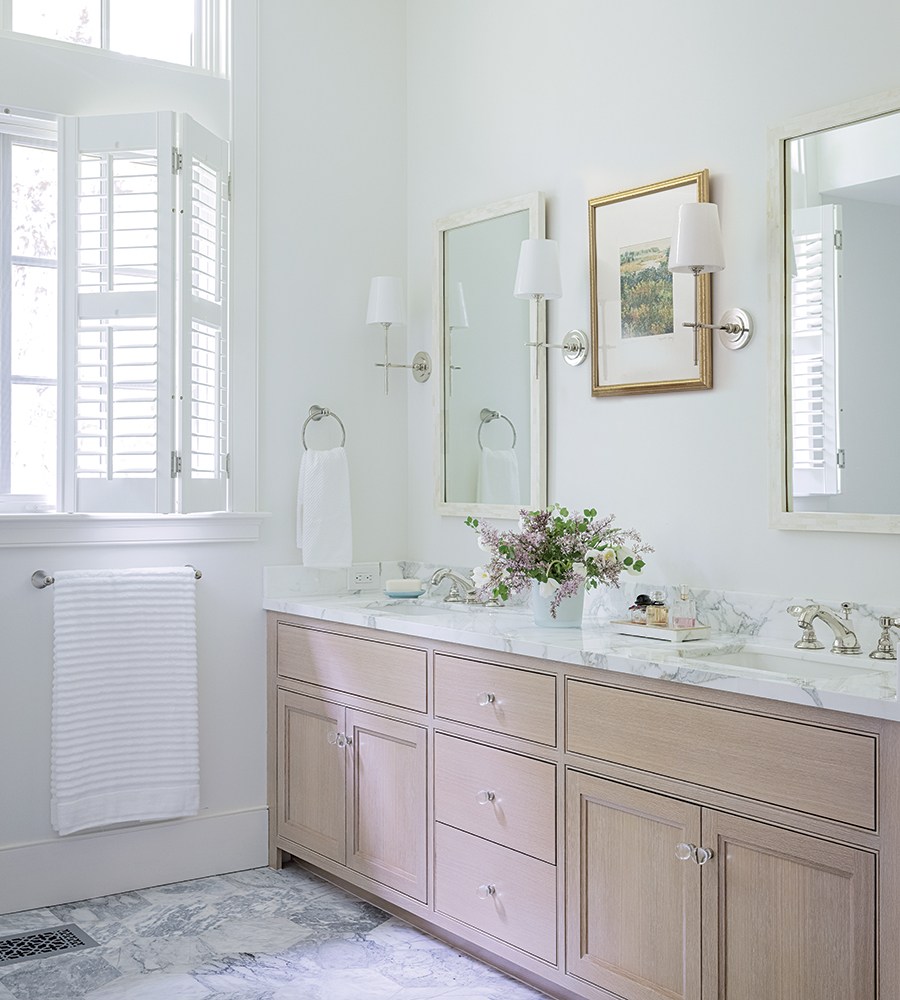 With the foresight that supply chain shortages would quickly limit their ability to source materials, Joe made sure to order bathroom faucets and the tile right away—an accelerated side effect of a COVID-19 redesign. / Photo by Michael J. Lee

To bring this authentic aesthetic to New England, the couple brought in interior designer Holly Joe. From their first Zoom conversation, the homeowners and Joe formed a connection that served as the foundation they’d need to navigate a home design amid the pandemic, when virtual meetings, supply chain shortages, and delays upon delays would interfere with the process.

A seasoned design pro, Joe understood the assignment. Bringing Tulum to Dover didn’t mean hauling in buckets of sand, but rather capturing the peaceful joy the couple had cherished during their time there. “You think of the wide-open skies, the sand and the white buildings, and all of the kinds of woods. We used artwork, colors, and textures to bring in that outside influence,” Joe explains.

A graphic designer, the wife created a digital inspiration book filled with photos of organic materials, plants, and rooms with rustic elements—a source Joe also leveraged when fleshing out the design. To start, though, she had to rework some of the rooms to make the home function for the couple’s blended family, which includes three teenagers, cats, and a puppy. Working with construction firm Howland Company, two offices were transformed into bedrooms with en suite bathrooms, so that everyone could have their own room.

After a month or so of virtual meetings, Joe met the couple and saw the house in person for the first time. “We all showed up and had masks, shoe booties, gloves—we looked like we were [in] hazmat suits,” Joe recalls.

Plastic armor aside, walking through the entryway into the two-story living room with French doors offering views of the pond beyond, Joe was struck. “It really was spectacular. I mean, it took my breath away,” she says. 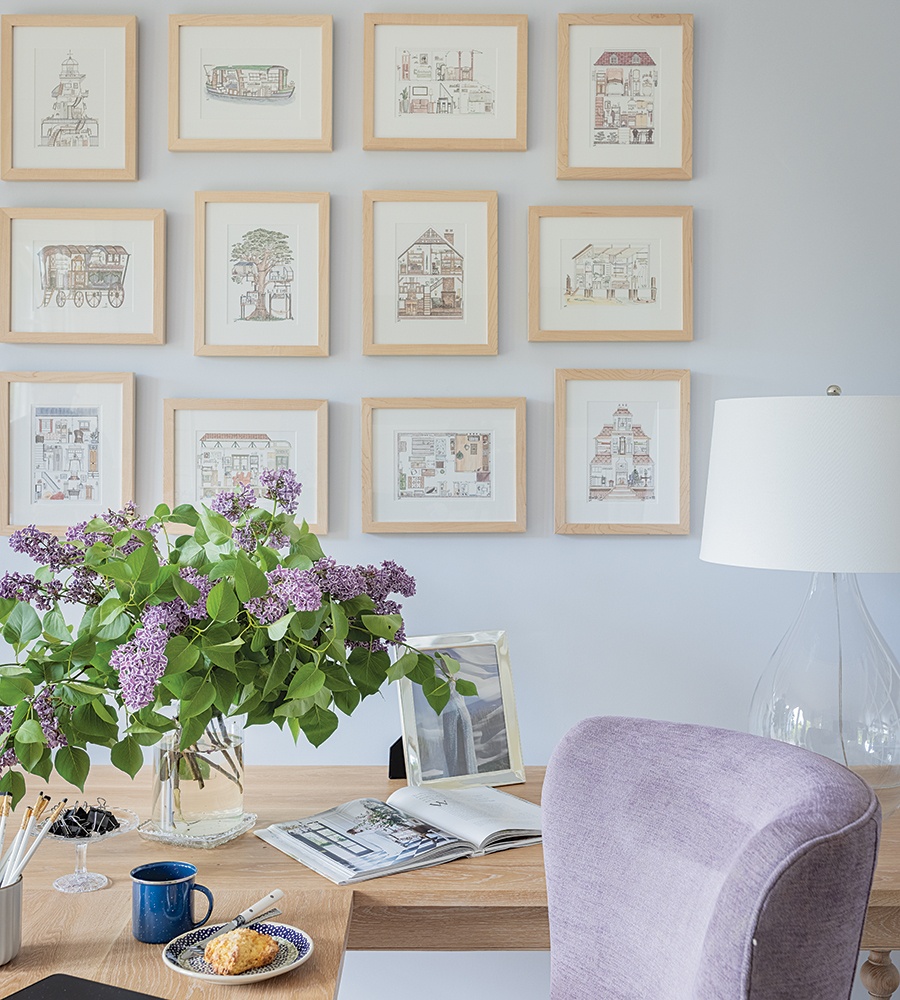 The repurposed cat-themed gallery wall hangs next to a sandy color L-shaped desk, handmade for the space by Dunes and Duchess. / Photo by Michael J. Lee 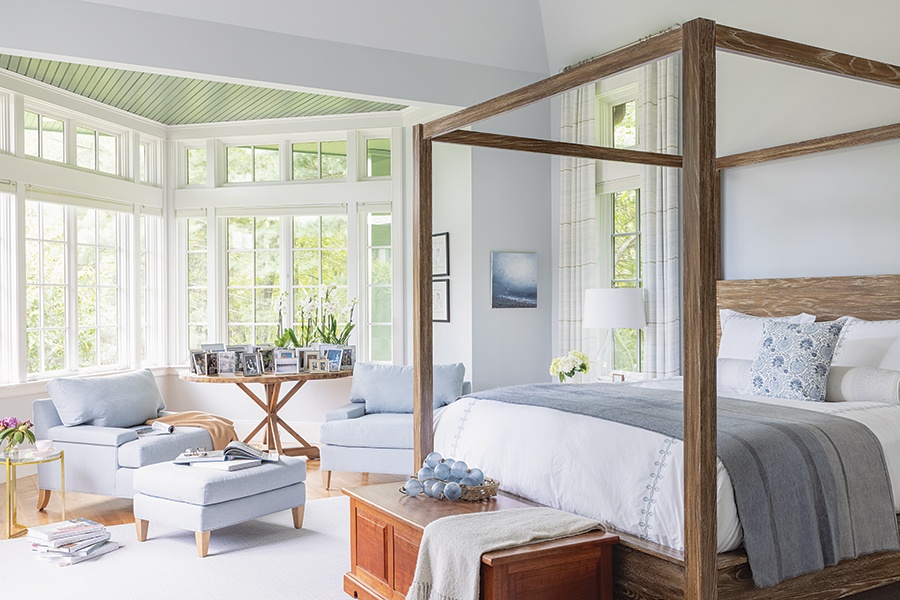 “This is the bedroom of my dreams,” Joe says. “I just absolutely love it.” Tucked in a sunny alcove, a pair of soft blue chairs flank a round wooden table, which the homeowners brought with them from their prior residence and originally bought at a consignment store, that is now filled with family photos. / Photo by Michael J. Lee 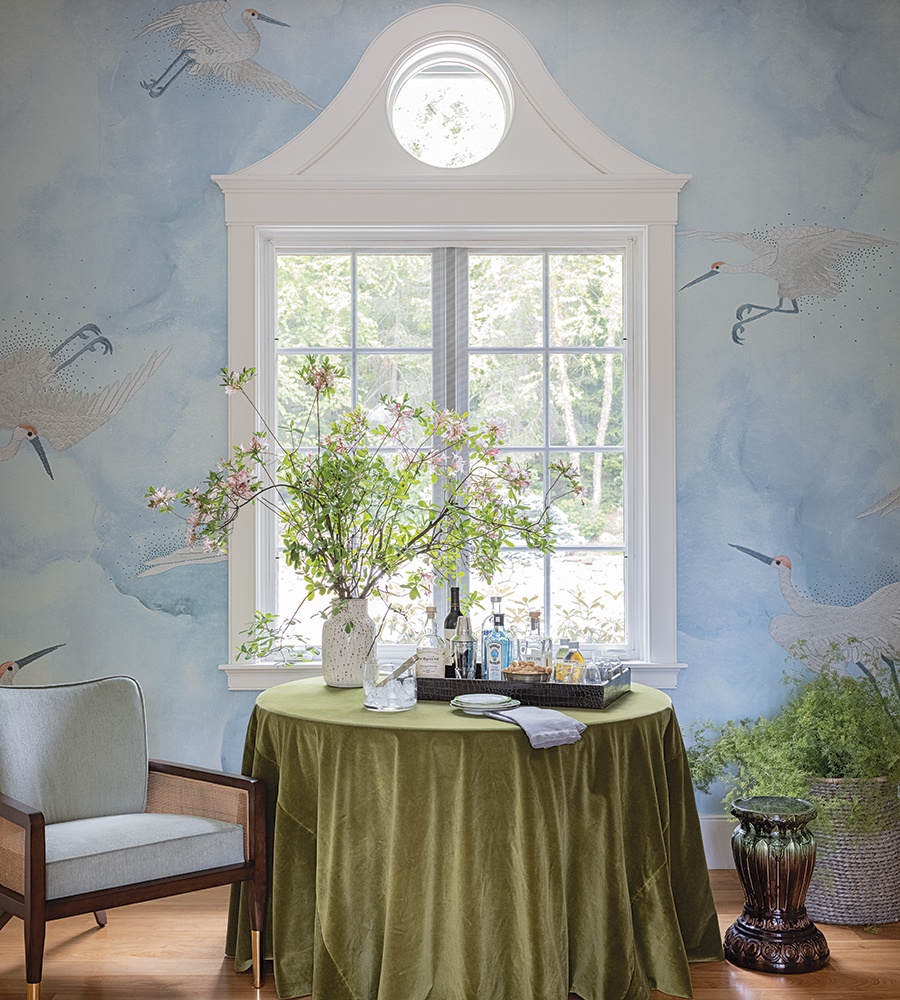 At the end of the dining room is a feature the homeowners never thought they wanted, that has since become a beloved conversation piece: An evocative wallcovering from Phillip Jeffries depicting herons floating through a blue, watercolor-like sky. / Photo by Michael J. Lee

Next to the living room is the wife’s study, which, if pressed, Joe says she would call her favorite room in the home. Soft lavender paint covers the walls, which are punctuated by a gallery with a whimsical backstory: “My husband travels a lot for work, and [he knows] I love cats,” the homeowner says. “So he brought this beautiful, very artsy cat calendar from Japan. I didn’t want to get rid of it, so I gave it to Holly and said maybe you can make a gallery wall.”

In the adjoining primary bedroom, the personal touches continue. A cherry wood trunk made by the husband’s late father sits at the foot of the bed, anchoring the canopy-free canopy bed that Joe selected to fit the scale of the high ceilings. “It was that light and airy look they were looking for,” she says.

The dining room carries on the motif of natural hues and textures, sporting a raffia weave wallcovering with a cadet blue layer peeking out from underneath. The blue touches throughout the home were important not only for invoking the seaside appeal of Tulum, but because the husband is colorblind. “We agreed on all the blue because we love it, and it’s actually the only color he can see without a problem,” the homeowner says. The room also features four different kinds of wood, between the dining table made by Boston-based Saltwoods, the dining chair legs, the pale wooden light sconces, and a rich wooden credenza that grounds the bright, spacious room. 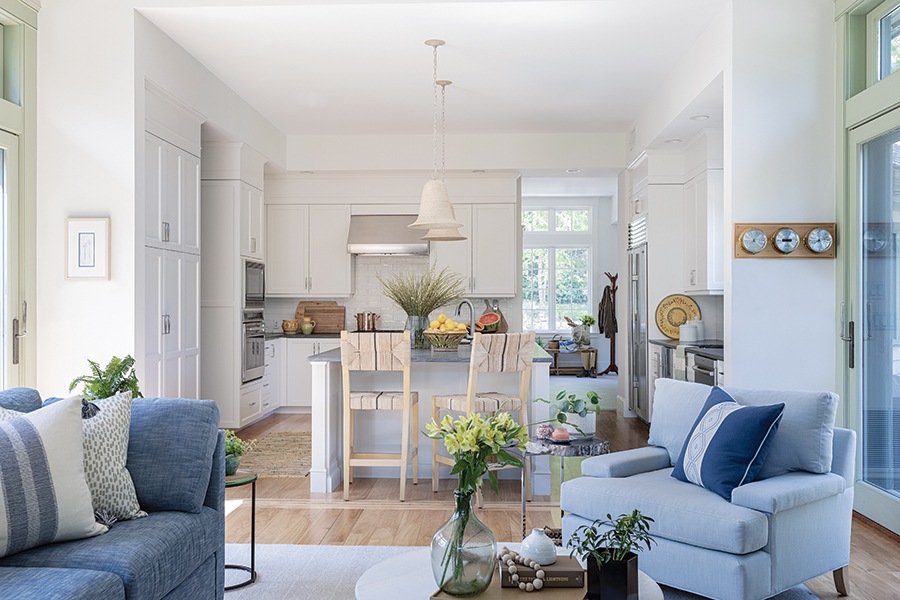 Beyond updating the cabinet colors and bringing in new stools, not much had to be done to the already functional kitchen. Looking past the blue chairs in the sitting area into the sandy white kitchen is like a visual vacation. / Photo by Michael J. Lee 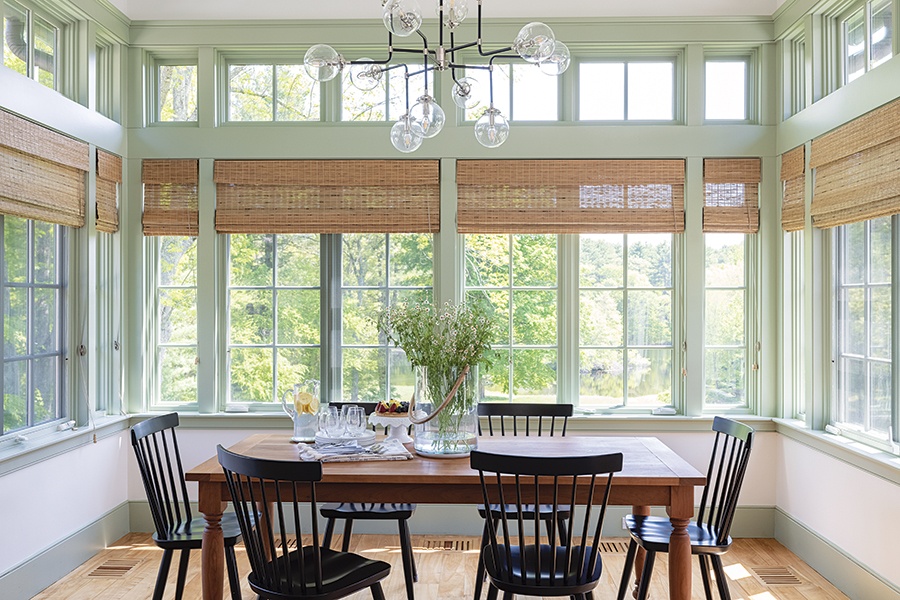 In the informal dining room, the walls of windows capture the views of the pond and the surrounding verdant landscape. Because the home was constructed in a U-shape to center around the pond, there’s not an unimpressive seat in the house. / Photo by Michael J. Lee

Through the open-concept kitchen, an informal dining area retained its original sage green trim. Joe brought in a custom-made wooden table and a new set of black chairs that mesh perfectly with the modernity of the light fixture consisting of several glass orbs that appear to be floating. On three walls, nearly floor-to-ceiling windows wrap around the dining table, allowing for striking views of nature just outside. “I was [sitting in this room] last fall. The breeze was blowing, and all these orange leaves were falling from the trees,” Joe remembers, captivated.

Seasons after first tentatively entering the home, it was a perfect, full-circle moment. “To be able to work on a project like this at the very beginning [of the pandemic], when everything was so closed down and no one knew what was happening, and then to have it open up and be this beautiful space that everybody loves….” Joe says. “It was just so wonderful.” 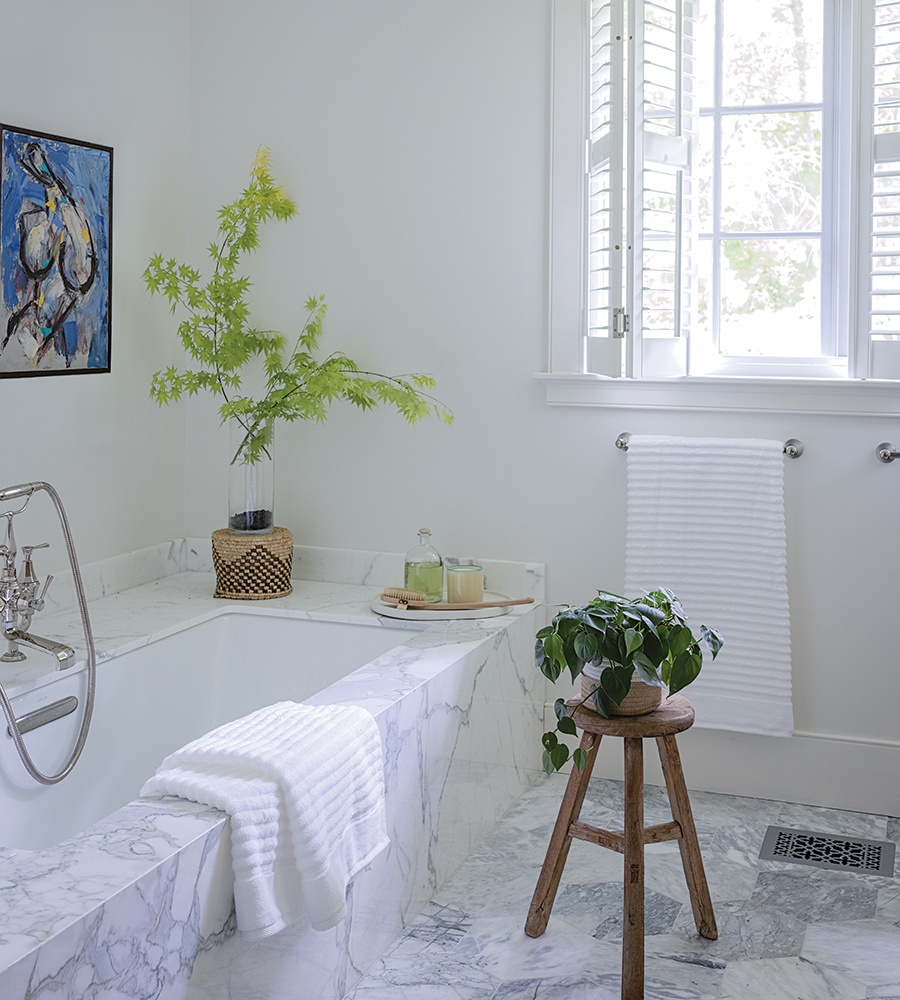 White surfaces, trim, and all around muted palette evoke a serene, spa-like atmosphere in the master bathroom. / Photo by Michael J. Lee

Sneak a Peek at This Year’s Kips Bay Decorator Show House, Which is Only Open This Weekend